An important part of proper digging is being able to pinpoint the area of the target. Once you hear a signal from your metal detector indicating that there is a target within range, find where the signal is strongest. Stand with your detector flat over the target. Swing the detector while keeping it parallel to the ground to the right and left as well as up and down to make a cross over the target. The loudest point will be the center of the target.
To retrieve the target properly, you will need a digging trowel or knife to cut into the ground. Trowels can be bought from a metal detector supply store, or you can purchase a hand spade from your local hardware or supply store. The best tool to use is a digging knife, again available through a metal detector supply store.
After you have mapped the area where the target lies, plunge your digging device into the soil at the far edge of the target. It takes practice and a good knowledge of how your detector responds to a target to get a hang of how deep to dig. Using the plug technique will allow you to remove a portion of dirt from the target area without disturbing the look of the area.
Try to get down fairly deep, but leave a portion of the tool out of the ground so that you can move it back and forth. Wiggle the tool to the left and right to try to make the cut into the ground as circular as possible. Do this until you have gone around the entire target. Take the tool out of the ground then plunge it in at an angle, so that you get underneath the cuts you just made. Work your way around the target until the soil feels loose. You should be able to remove the entire area. This is your plug. Once the plug has been removed, run the metal detector over the plug and the hole where the plug once was to find where the target is. This allows you to find the target no matter how shallow or deep it is buried. Remove the target from the dirt. Once the target has been removed, the dirt that has broken off the plug can be put back into the hole and the grass put back into place.

Well it's raining again but after this wet spell the weather is supposed to get nice and warm. Speaking of weather I was under it yesterday with that 24 hour flu bug. Still not 100% but much better than yesterday. With Easter this coming Sunday I don't know if I'll be getting out, but I'm going to try.
Posted by johnny b at 11:19 AM No comments: 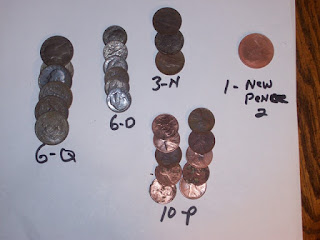 Went to an area school for a couple of hours with my son. In between playing basketball with him I did a little hunting. I did manage to find $2.35 and foreign coin. The wind was brutal but when you get the chance to hunt you've got to take it.

Went to the daughter's school for about an hour and found 42 cents. I guess that's better than finding nothing so I'll take it. I do plan to go out later this morning but still not sure where. The weather should be nice today so I hope to have a good hunt.
Posted by johnny b at 7:26 AM No comments: