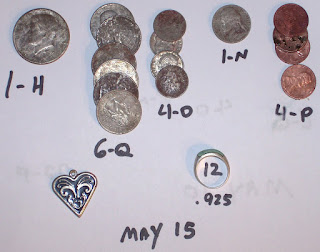 I went to a couple of places I've hunted before and I did manage to find my first half dollar - JFK 71. It came up as 50 cents on the detector and I didn't believe it because of all the steel I find. It was a surprise that it was a coin - not silver - but my first half.- I'll take it. Over 2 bucks total and silver ring #7 - 12 overall. Can't wait to get out tomorrow - one more day at my school.

Coin, relic and treasure hunting at the beach, in the park, in a field, or around an old homestead can be one of the most
rewarding forms of metal detecting.Throughout the world there are metal objects that have been buried for centuries.
Treasure hunters around the world consistently unearth relics from the past such as old buttons, badges, belt-buckles, US
civil war memorabilia, and Roman artifacts.
These can be extremely valuable items, some worth many thousands of dollars.
Decimal, pre-decimal and Roman coins are found scattered throughout Europe, Spanish Doubloons and pieces of Eight are
often found on the beaches of the USA.

Where to Hunt
You must hunt in well patronized areas such as beaches,parks, showgrounds or picnic areas, Carnivals, old abandoned houses, hiking trails:  these are just some of the spots that could hold some interesting finds.  Your own backyard may even
yield valuable treasure. Consider the age of your home and who may have lived there in the past.
Browsing old maps or talking to people at the local historical society could also lead you to little-known areas of interest.
Posted by johnny b at 6:50 AM No comments:

Went to the kiddie lot close to the house just to see if I could find 45 cents to go over the $60 mark. I did manage 63 cents and a crowd of kids. I think the detector draws them in. Any way I am over the $60 total - now I have to keep the wife from getting to the money before me. 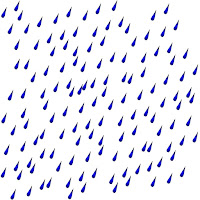 It looks like rain for today and the next couple of days. Guess it's research time. Will try and get out if it stops. Happy hunting - JB
Posted by johnny b at 12:14 PM No comments: 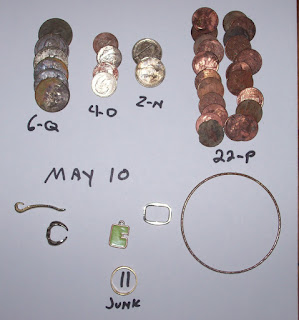 Well I tried a couple of new parks and one old one. The new parks are very old parks in the city which didn't give up any old coins but a ton of pull tabs. The tot lots didn't yield to much either expect pennies and the old lot gave me ring #6 - 11 overall. Thought it was gold but it's only a junk ring. So close yet so far. 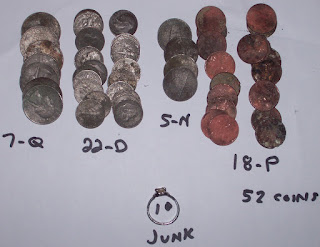 Went out today after visiting the mother in-law. Windy, wet and snowing but determined. I went to a school that yielded over 50 coins last week as it did today. Kids must lose a ton of dimes because I found over 20 today and 23 last week. Central NY weather - I quit last week because it was hot and muggy and today because I was cold and wet- go figure. I did manage to find ring #10 - junk but still a ring. Happy hunting all and stay warm.