The weather has been getting colder and the days shorter but I still get out at lunch time to hunt. My string of wheat pennies is over and so is finding a lot of clad.  I have only found 40 cents in the last 2 hunts - 1-q, 1-d and five pennies.  At least I'm finding something.

Posted by johnny b at 6:08 AM No comments: Links to this post

Pulse Induction (PI):   pulse-induction metal detectors use the same coil(s) to both transmit and receive. A PI metal detector works by sending quick and powerful electrical pulses through its coil-usually about 100 pulses per second-each one creating a brief magnetic field. When a pulse ends, this field reverses polarity and collapses, causing a reflective pulse to run through the coil. If a conductive metal is present, the reflective pulse will take longer to disappear. PI metal detectors make excellent beach detectors because of their ability to ignore ground mineralization; ground minerals are poorer conductors than metals, and are thus less likely to interfere with the returning signal of a pulse-induction metal detector.
Relic Hunting:    relic hunting refers to metal detecting in quest of objects that possess historical (and sometimes also economic) value.
Scrubbing:   scrubbing or scraping is a metal detecting technique in which the detector coil is kept in direct contact with the ground. This helps a detectorist to gain deeper readings, though it can have a detrimental effect on the search coil, which is why many detectorists use search coil covers.
Sweep:    the motion a detectorist employs when using a metal detector, so-called because it usually resembles the side-to-side movement used when sweeping a floor.
Threshold:   the threshold is essentially status quo for the listening detectorist. The threshold is a continuous, faint tone that provides an audible reference point for ground-balancing a detector. It also determines the minimum sound level for pinpointing targets, including deep targets in discriminate mode.
Very Low Frequency (VLF):   a very low frequency metal detector, or VLF detector, features a search coil with an outer transmitting loop and an inner receiving loop. The receiver coil is shielded from the transmitter coil's magnetic field, but it detects the magnetic fields emanated by objects in the ground.
Wheat Penny:   a wheat penny or wheatie is a penny that was produced between 1909 and 1958. The reverse of the coin featured two stylized wheat stalks. The wheat penny is one of the many types of coins that can be found using a coin detector.
Widescan (Double D or 2D):   in contrast to concentric search coils, widescan search coils are coplanar, i.e. their transmit and receive windings are positioned back-to-back in the form of two Ds. This gives widescan metal detector coils a larger search area and also minimizes the effect of ground minerals.
Posted by johnny b at 6:01 AM No comments: Links to this post

Head:    head is a commonly used synonym for search coil.
Masking:   masking occurs when ground minerals or buried objects interfere with the detection of a legitimate find, resulting in a mixed signal. This is also called "nulled out."
Matrix:   matrix refers to the total detection area covered by a search coil's electromagnetic field. (Though if you ever say "What is the matrix?," don't blame us if you wake up and find yourself talking to Laurence Fishburne.)
Negative Ground:   if a metal detector has a preset ground balance, then negative ground, i.e. ground that has more non-conductive minerals and fewer conductive minerals, will cause a negative or nulling effect. In other words, negative ground may cause metal detectors to ignore more signal than is necessary.
Neutral Ground:   neutral ground is soil that contains neither conductive nor non-conductive minerals.
Notch:   notch filtering or notch discrimination is used to create a range of accepted and rejected targets. Setting the notch level to discriminate against certain objects means tuning out or blocking a particular frequency band. This is called notch reject. Conversely, creating a notch window of accepted frequencies is called notch accept.
Null:   when a metal or coin detector coil passes over targets that have been discriminated against or are outside of the accepted notch window, a detector's threshold audio will go quiet or drop momentarily, i.e. go null.
Pinpointing:    pinpointing refers to the act of determining the precise location of a target. This can be accomplished by manually "detuning" a metal detector, or adjusting it to be less sensitive, and then sweeping the target response area again. Because the detector is less sensitive after detuning, an audio signal should provide a more exact location due to the strength of the signal.
Positive Ground:   positive ground is soil that contains a high amount of conductive minerals. Positive ground results in too many signals, which can make it difficult or impossible for a metal detectorist to find legitimate targets. This often occurs on wet beaches, due to their high salt content.
Prospecting:   prospecting means treasure hunting or going metal detecting in search of gold, silver, or valuables.
Posted by johnny b at 6:18 AM No comments: Links to this post

Coil:   the coil, which is also known as the head, loop, or antenna, is the metal-sensing part of a detector. A metal detector coil is composed of wire coils in a circular or elliptical plastic housing. A detector may have one or more coils acting as both transmitter(s) and receiver(s), or it may have coils dedicated specifically to either transmitting or receiving.
Coin Shooting:   a slang term for coin hunting, or going detecting specifically in search of coins.
Concentric Coil:   concentric means "having a common center." Concentric search coils feature circular transmit and receive windings of unequal diameters that are aligned on a common center, producing a cone-shaped search matrix. If the wire coils/windings of a concentric coil are on the same plane, it's referred to as coplanar concentric.
Electromagnetic Field:   an electromagnetic field is an invisible matrix created by electrically charged objects. In metal detectors, the electrical current moving through the transmitter coil of the search head produces an electromagnetic field, and this field extends to a depth perpendicular to the size of the coil. When the field encounters metals, they generate their own fields, which can be measured by a metal detector's receiver coil.
Elliptical Coil:   an ellipse is an extended oval shape resembling a flattened circle. A search coil in this shape is called an elliptical coil. Elliptical metal detector coils can be either concentric or widescan.
Ground Balance:   soil often contains ground minerals, magnetic material composed of ferric oxide and other metals. These iron-bearing materials cause loss of depth in a metal detector. Ground balance is the ability to manually or electronically ignore or neutralize these signals. This is sometimes called ground tracking or ground reject.
Posted by johnny b at 6:17 AM No comments: Links to this post

On a wheat roll

I went out during lunch yesterday - didn't find much only 18 cents but I did manage to find another wheat penny - 1949.  My last four hunts I have found a least one wheat.  I'll take it.  Now if I could find some silver that would be great.  My coinage yesterday - 1-d, 1-n and 2 pennies.

All Metal:   a non-discriminate control setting that accepts detection of all metal objects, including ferrous (i.e. iron-containing) ground minerals.
Audio ID:   also known as tone ID, this detector feature identifies targets via a tone that corresponds to their conductivity.
Beat-frequency Oscillation (BFO):   a beat-frequency oscillator is the most basic type of metal detector. A BFO detector works by measuring the difference in frequency between its search coil and a small reference coil in its control box. This difference creates an audible signal or "beat," which varies in tone and duration when metals or minerals affect the frequency of the search coil. BFO metal detectors are less expensive than PI or VLF detectors, but also less accurate.
Cache:   a cache is a group of objects that has been intentionally hidden or buried.
Clad:    coin detectors often discover clad, which is a term for coins that are still in circulation. With clad coins, a surface metal covers or clads a base metal. Pennies, for example, used to be made from copper, but are now copper-clad zinc.
Posted by johnny b at 6:18 AM No comments: Links to this post

We had some rain Sunday morning so I couldn't get out as early as I wanted but did manage a little hunt.  I went back to my now favorite school  - not really looking for clad but older coins.  I found 1-q, 1-d, a couple of zinc pennies, a Saint Christopher medallion and 2 wheat pennies - 1924 and 1956-d.  I had one hit that I dug about a foot down and could not find the target and I was getting a nice hit still. Will have to go back when the ground is softer and try it again.  Not a bad weekend 4 wheat pennies total. 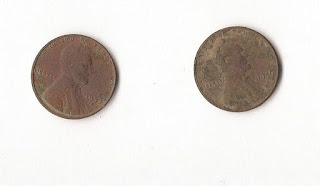